Join WTFoot and discover everything you want to know about his current girlfriend or wife, his shocking salary and the amazing tattoos that are inked on his body. Find out what house the English forward lives in or have a quick look at his cars! 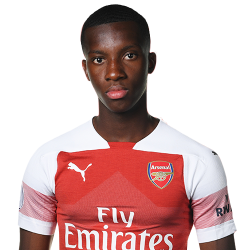 Wow! This means the average man in the UK needs to work for at least 2.2 years to earn the same as Mad Eddie earns in only 1 month.

He has been playing professional football for a couple of years now. He recently got his contract upgraded, so right now he is earning a whole lot more than during his youth-years. His net worth is on the rise and at this moment he worth about 1 Million Euro (900.000 Pound). His market value is on the rise too! The youngster has already scored a couple of goals for Arsenal and he is a pretty promising prospect. His market value at this moment is about 8 million Euro (7.1 Million Pound).

Nketiah Tattoo - Does he have one?