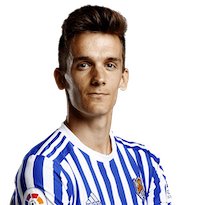 Wow! This means the average man in the UK needs to work for at least 2.9 years to earn the same as earns in only 1 month.

The Spanish defender came through the academy of Real Madrid before having loan spells at Rayo Vallecano and Málaga. After a successful spell at Real Sociedad he moved to England to join Marcelo Bielsa's Leeds United. The 27 year old has a net worth close to 12.5 Million Euro (11.4 Million Pound) and his market value is somewhere in the region of 20 Million Euro (17.5 Million Pound).