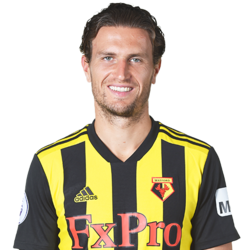 Wow! This means the average man in the UK needs to work for at least 6.5 years to earn the same as Jan earns in only 1 month.

The Dutchman came out of the Feyenoord youth academy and played for Eredivisie clubs Heerenveen and Feyenoord before his move to England with Newcastle United. He signed for Watford in the summer of 2016 and has a net worth close to €16.2 million (£14 million). The right-back has a market value of €6 million (£5.2 million).

Janmaat Tattoo - Does he have one?