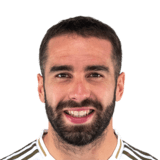 Wow! This means the average man in the UK needs to work for at least 20.6 years to earn the same as Dani earns in only 1 month.

The Spaniard was born in bred in Madrid, he started his footballing career with the youth academy of Real Madrid and have featured in the Los Blancos' first-team since 2013. The defender has a net worth of approximately €49 million (£44 million) to his name. One of the finest full-backs of his era, he is worth well over €52 million (£46 million).

Carvajal Tattoo - Does he have one?