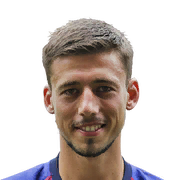 Wow! This means the average man in the UK needs to work for at least 7.6 years to earn the same as Clem earns in only 1 month.

The Frenchman came up through the youth system at AS Nancy and represented the first-team between 2013-2017. After a decade at the Ligue 1 club he moved to Spain, a year in Sevilla was followed by his big move to FC Barcelona in 2018. The defender has a net worth of €18 million (£16.5 million), and a market value of a whopping €60 million (£55 million).

Lenglet Tattoo - Does he have one?