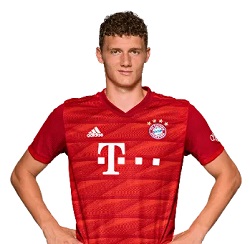 Wow! This means the average man in the UK needs to work for at least 2.9 years to earn the same as Benji earns in only 1 month.

The French defender came into prominence after featuring in France's 2018 FIFA World Cup triumph in Russia. The 23-year old's big move to Bayern Munich in the summer of 2019 brings his net worth up to €7 million (£6 million). His market value is estimated to be in the region of €35 million (£30 million).

Pavard Tattoo - Does he have one?