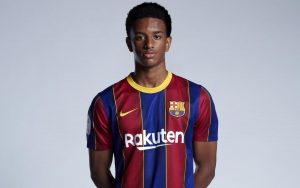 Wow! This means the average man in the UK needs to work for at least 0.1 years to earn the same as La Joia earns in only 1 month.

Money shouldn't even be on his mind right now. It's the perfect time for him to focus on his football and get his career going. Still a full-time member of FCB's U-19 side, his market value is at 200,000 Euros. He might have about 15,000 Euros in the bank after everything.

Baldé Tattoo - Does he have one?