Join us and discover everything you want to know about his current girlfriend or wife, his incredible salary and the amazing tattoos that are inked on his body. Find out what house the French Center lives in or have a quick look at his cars! 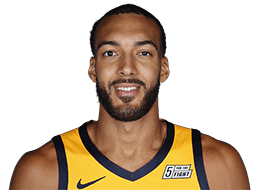 Being born in France, he might have never thought he is going to become an NBA star. He is currently playing at Utah Jazz and has been a team member for six seasons now. Another team in which he plays is the French national basketball team. As he is a massive 2.16 m player, you indeed should expect him to play in the center position. In the 2016-17 season, he was the NBA blocks leader and won the back-to-back NBA Defensive Player of the Year award in 2018 and 2019 as well. These two titles make him one of only ten players in NBA History that received that honor twice. His father was also a former professional basketball player, so we might have some insights from where he got this passion. Back in 2003, he started to play, and seven years later, in 2010, he was competing in the FIBA Europe Under-18 Championship. He finished as the best scorer of the team. This was one of the signs that made him aware he has got a shot at this and didn't stop since then to improve. He declared for the 2013 NBA draft, and the rest is History. He had some great runs in his seasons, and we are curious to see how this young player is going to perform.

Wow! This means the average man in the United States needs to work for at least 32.3 years to earn the same as The Stifle Tower earns in only 1 month.

He is the 46th best NBA player this year, and he made a big jump in his salary when he jumped from 2 Million dollars to 21 Million dollars salary in 2017. As a result his net worth is obviously growing as well. Good stuff Stifle Tower.

Gobert Tattoo - Does he have one?