Join us and discover everything you want to know about his current girlfriend or wife, his incredible salary and the amazing tattoos that are inked on his body. Find out what house the Cameroonian Power Forward lives in or have a quick look at his cars! 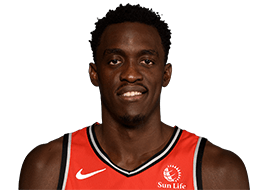 Pascal Siakam is a professional basketball player that currently plays for the Toronto Raptors. He was born in Douala, a city in Cameroon. He wanted to become a Catholic Priest as a child, but his priority changed when he discovered the basketball. Even though his older brothers were already earning scholarships through this sport, Pascal had a slower start. The significant change happened when he was selected to attend the so-called Basketball Without Borders Camp. Even though he did not have considerable basketball experience, he still gained a lot of attention towards him due to high energy levels. The president of The Raptors Masai Ujiri saw him at the camp and mentioned that "this kid's effort is memorable". After that, his path was clear. He moved to the United States at the age of sixteen and settled down in Lewisville, Texas. There he was selected by the New Mexico State University. He joined this university in 2013 and kept improving his game. He won amongst others the WAC Player of the Year honour. A few years later, we see Siakam declaring for the NBA draft, and the rest is history.

Wow! This means the average man in the United States needs to work for at least 40.4 years to earn the same as Spicy P. earns in only 1 month.

As he is still at the beginning of his career he still has a long distance to go. However, as he recently signed on a four-year extension with the Toronto Raptors we are curious to see how he changes.

Siakam Tattoo - Does he have one?