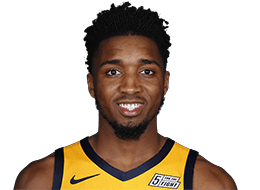 This shooting guard from Elmsford, New York was born on September 7th, 1996. In high school he played basketball and baseball as well. The player showed slam dunk skills already in high school and making basketball his focus the shooting guard got more attention from college basketball recruiters. As a freshman the player had a slow start at the University of Louisville but during seasons increased his stats and averages significantly. Drafted by the Denver Nuggets in the 2017 NBA draft as the 13th overall pick he was immediately traded to the Utah Jazz on draft night. During his rookie season, the shooting guard was named to the NBA All - Rookie First Team and as a slam - dunker in heart won the 2018 Slam Dunk Contest. The player has a bright future in the NBA, he is incredibly fast with good ball control and doesn’t hesitate to dunk or score over significantly higher center player. This shooting guard set the Utah Jazz scoring record for a rookie and became the first NBA rookie to score 40 points in a game since 2011.

Wow! This means the average man in the United States needs to work for at least 18.9 years to earn the same as Spida earns in only 1 month.

Playing as a Shooting Guard for the Utah Jazz, this player reportedly earns around 14 milion dollars as his yearly salary. He has an estimated net worth of over 30 Milion Dollars. He is still young and his career is still in the rising so we will see probably plenty more from this shooting guard

Mitchell Tattoo - Does he have one?