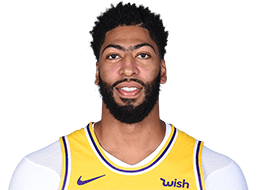 Born in Chicago, Illinois in 1993, the first overall pick in the 2012 NBA draft, this power forward began his basketball career very early in life. With his impressive height, combined with sports agility, he was noticeable to scouts and remains one of the tallest players to have played the game. While playing for his university team the Kentucky Wildcats he delivered impressive performances in his college days and received the “US Basketball Writers Association National Freshman of the Year” award. As a freshman he led in blocks and set records and also being awarded with numerous National Player of the Year awards. Davis left college for the NBA after just one season and was drafted by the todays New Orleans Pelicans, soon becoming an All-Star and not surprisingly already leading the NBA in blocked shots per game. Today this power forward is a six - time All-Star and the youngest player to score at least 59 points in a single NBA game. He left for the Los Angeles Lakers in 2019 and this All – Star 52 points record – breaker started already breaking some of the L.A. Lakers records. The first Laker to put up 40 points/20 rebounds since Shaq, but “The brow” did it in just 30 minutes of play and it was never done before in the history of NBA.

Wow! This means the average man in the United States needs to work for at least 36.6 years to earn the same as The Brow earns in only 1 month.

The player is estimated to be worth as much as $200 million and "The Brow" only played seven full seasons in the NBA. He still has some years left and he surely will make plenty more. During his career he made over $100 million in cash earnings from his NBA contracts.

Davis Tattoo - Does he have one?