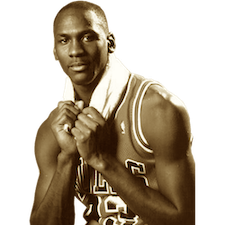 Have you ever hear of retired professionals making more money based on the fact that they used to practice their trade twenty odd years ago? Well, he does. MJ is a money minting machine. He made less than 100 Million Dollars playing basketball. That's chump change considering what he's earning now. The legend has sponsorship deals with Nike, Gatorade, Hanes, and Upper Deck. His brand sells. The way in which he has marketed himself could very well be a lesson for pro athletes in the future. He's estimated to be worth somewhere in the region of about 1.6 Billion Dollars and 2.1 Billion Dollars.

What does Jordan currently do?