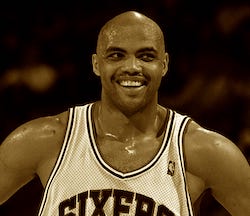 Picked by the Philadelphia 76ers as the 5th overall in round 1 of the 1984 NBA Draft, this legend has come a long way since. Bagging the NBA's MVP award in 1993, he has also represented the Phoenix Suns and the Houston Rockets. 'The Round Mound Of Rebound' once asked youngsters to look up to their parents for inspiration, and not athletes. Having endorsed Coca Cola, Nike, and McDonald's in the past, he made a modest earning from the NBA compared to today's standards. We think he's worth about 40 Million Dollars. It's not a lot but still plentiful to help him retire in peace if he doesn't gamble it away, that is.

What does Barkley currently do?