In this post, we’re going to be taking a look a look at the life of Yvette Prieto. She is the wife of one of the most recognisable athletes in the world- Michael Jordan.

Biography of a Cuban-American model

Yvette Prieto was born on the 26th of March, 1979, in Miami, Florida. Her parents are Carlos and Maria Prieto. This lady is of Cuban descent and has a brother named Carlos.

What did Yvette Prieto do for work?

Mrs Jordan, who was brought up in Miami, pursued a degree in Business Management before taking up a career in modelling. Yvette has worked with Alexander Wang, the former Creative Director of Balenciaga.

Thanks to her background in Business Management, she was appointed as the Principal of Miami based companies Aqua Management and Beet the LBS.

When and where did she meet Michael Jordan?

If you were expecting us to give you a dreamy and romantic story about these lovebirds, you would be disappointed. Yvette met MJ at a Miami nightclub in 2008. He was attracted to her, and the two kicked things off soon enough.

Moving together, the engagement, and the marriage

Yvette and Michael began living together in a 5,500 square-foot mansion in Miami in 2009. Michael had come off a nasty divorce and found the company of Yvette to be soothing. Two years later, during the Christmas holidays, Michael proposed to her.

The couple took their time to plan the wedding, and finally, in 2013, they were married.

How has marriage treated Yvette, and how many kids does she have?

Unlike her husband, this is Yvette’s first marriage. This lady has had the best time of her life being married to the basketball superstar. This woman gave birth to identical twins Victoria and Ysabel on the 11th of February, 2014.

When the inches do not matter. Yvette’s body stats

Yvette Prieto stands at 1.68 m or 5 ft 6 in. Compared to her husband, she is a foot shorter. This beautiful lady weighs a mere 55 kgs. This brown-eyed beauty’s body measurements of 37-26-36 give her a conventional hourglass figure. Needless to say that this model takes pretty good care of her body.

How does Yvette Prieto spend all her time?

Yvette does have quite a lot of time on her hands. This mum of two spends most of her spare time working with charities. She has created a foundation along with her husband to help the less fortunate. In addition to that, she also works with anyone that needs a helping hand. She, along with her husband, go out of their way to give back to the community.

Who is Yvette as a person?

As a soul with youthful looks, this brunette relishes being an exquisite lady. She is a graceful person and loves to spend time with her family. Yvette usually avoids drama in her life. This gorgeous WAG does not like people who spend their time idly. She likes to do something productive at all times.

Although she doesn’t show it, this Latina is a passionate lady. Everyone that knows her will testify that she commits fully to any endeavour that she takes on. This lady is fearless and loves taking on new challenges. She has the natural ability to be impulsive, but we don’t think that’s a bad thing for her.

One other juicy detail about Yvette Prieto

Before we end this post, we thought it would be a good idea to reveal another piece of information about this lass. Prior to meeting Michael, she was romantically involved with the older brother of Enrique Iglesias. This loving lady was the third woman Julio Iglesias Jr had ever dated. Sadly for him, it didn’t work out. 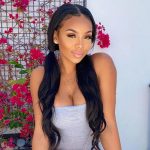 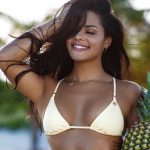