Are you curious enough to know all the details of Vlada Zinchenko’s life, career, relationships, and many more unknown facts?

The story of Vlada and Oleksandr comes under some of the most beautiful romances that took birth unexpectedly. Who is Oleksandr’s wife? How did the two love birds meet? Which incident brought out this little secret in front of the crowd?

This article got everything covered up for you. So, let’s get started to dive deep into the life of Vlada Zinchenko, the journalist Oleksandr fell for.

Who Is Vlada Zinchenko?

This 25-year-old beauty was born in Vinnytsia, Ukraine. Vlada was acquainted with the football fans way before she started dating Oleksandr. She is a reporter at channel football ½, and throughout her career, she has interviewed a number of star footballers (Ronaldo being one amongst them). Apart from being a stunning reporter, she has also excelled in her modeling career.

From Meeting Vlada To Proposing at Ukraine’s National Stadium

Their story might seem like a script of a rom-com as the chemistry began when apparently the journalist was interviewing the team. Oleksandr’s eyes caught a glance, and he was intrigued to know more about this stunning Ukrainian reporter.

Love was in the air but somehow managed to stay a secret for a long time. Research has shown that the team players knew about this little story cooking away from the field. They also kept it a secret until one incident brought it out in the open.

Oleksandr reportedly kissed Vlada after an interview, and the rumors started spreading in the air. The fans were curious to know what’s going on between the two, but the denial continued. Although it was quite clear after that, they remained silent about it.

Their beautiful chemistry got them together, and after just one year of dating, the couple decided to tie the knots together. He beautifully proposed to her at Ukraine’s National Stadium in Kyiv. They both were surrounded by a bunch of roses as the lady said yes to his stunning proposal. As Oleksandr mentioned, “it was the most important yes of my life.” After a big win, both of them were found wearing their football t-shirts as the proposal occurred.

Some love stories are meant to happen, and this is definitely one amongst them. Right after being engaged, the couple happily announced it to their fans through Instagram. You must already know the reaction as everyone was waiting for this moment and it finally happened.

Her love for dogs can clearly be seen through her and Olexandr’s Instagram posts. They have multiple dogs that they often take out for a stroll or chill around at their place with. Once, they even took their babies to the stadium. Indeed one happy family.

Vlada is quite active on her Instagram account and is seen organizing frequent giveaways for her fans and followers.

Apart from Instagram, this extremely talented young lady has made her presence on youtube. She has 45.5k subscribers on youtube and is quite consistent with posting videos there. Her fans often find some really cute and hilarious videos of her and Olexandr on her channel.

She is indeed one of the best reporters the channel could have as she really enjoys the work she does.

Fans Are Always Curious To Know More About Her

The lady with class is often questioned in the comment section for tips and tricks related to fashion and beauty. Why wouldn’t she be asked? After all, her dressing sense, height, and style speak for herself.

Apart from her interesting work-life, she makes the most out of every moment by engaging in fun activities like skiing. She and Olexandr often travel to interesting places and try things they have never tried before. After all, exploring the world with a caring and loving partner is something we all desire, don’t we? The entire family, including the happy couple and their two dogs, enjoy the family time to the fullest.

Overall, Vlada and Olexandr live a crazy and happy life together. They share their happiest and saddest moments with each other. Undoubtedly, one of the favorite couples among fans will always remain the topic of discussion. 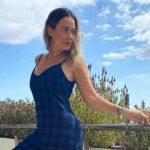 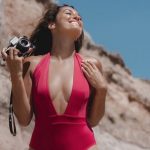