Georginio Wijnaldum is a professional dutch football player who plays for Premier League Club, Liverpool, and the Netherlands national team. He left people in awe when he became the youngest player in the club as he entered in 2007. But wait, there are a ton of articles about his professional life.  Without any further delay, let’s get acquainted with Wijnaldum’s girlfriend.

Mirella Pereira is a stunning 26-year-old lady who drove our dutch footballer crazy. Her Instagram profile clearly shows her love for traveling. Right after Georginio Wijnaldum came into her life, the two have started exploring some of the most exotic cities together. There is no better feeling than traveling the world with the love of your life, is there?

Mirella’s zodiac sign is Gemini. Being a Gemini, she is intellectually curious and is always seen exploring new areas of life. She never gets satisfied with one area of life and is always juggling between many. Whether it comes down to a professional career or interests, Gemini never finds comfort in one.

Sometimes we wonder if our professional dutch footballer fell for the chaos in her head. Or did he fall for her amazing dance moves? Mirella can hardly stay off the dance floor for long. Our search regarding Mirella’s birthplace is still going on, but we will give you further details soon. We are still unsure about her career; this too shall be brought forth soon.

Georginio Wijnaldum is one of those footballers who have always stood up for the team, even in the worst-case scenarios. He was born on 11th November 1990, and the discussions of his versatility are endless. Georginio’s interest in football developed when he was merely 6 years old.

One of the most interesting facts about Georginio Wijnaldum is that he made his debut when he was just 16 years old. Young boys with big dreams often make it in the end. This is one such success story, and his effort finally led him to the top. He ended up becoming one of the most renowned players in the football world. Did you know that Wijnaldum was a key player in the Fifa World Cup 2014?

Let’s now move ahead and explore Mirella and Georginio’s story in detail.

When Did The Two Start Dating?

Georginio Wijnaldum started dating Mirella Pereira in 2017. But the rumors of the two seeing each other began in 2016. Before crossing paths with Pereira, Georginio was in a long-term relationship with his high school sweetheart. The two did not end on good terms, and eventually, our football star came across this beauty. After he made a few appearances with Mirella, the curiosity of fans began to rise. The two of them currently live with each other in Paris. Living together is indeed a big decision, but the two seem quite happy and content in each other’s company.

Mirella is one of those people who are often found scrolling through Instagram and posting crazy pictures quite frequently. Yes, our dutch footballer’s girlfriend is as active on Instagram as she is in real life. The lady indeed loves social interaction, and people around her enjoy her company. Who wouldn’t want a jolly and cheerful person who becomes the life of the party wherever they go?

By scrolling through Mirella’s Instagram, you will come to know that the two of them love traveling together. The exotic locations they have covered so far are all over her Instagram account. They are still planning to take other countries off their list. Fans are excited in advance to come across the couple’s stunning pictures.

She has 15.1K followers on Instagram, and she drives them crazy with her stunning clicks. Her Instagram clearly depicts her love for clicking photographs. We can clearly see that the lady is indeed kicking off her fitness goals. The bikini pictures in her feed speak for themselves.

Mirella can be seen indulging in fun activities which shows her interests quite well. Our professional dutch footballer Wijnaldum indeed came across a gem. 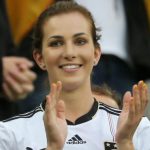