A.J Pollock, the 33-year-old Connecticut native, went to RHAM High School in Connecticut. He played three sports at school – basketball, baseball, and soccer. He went to the University of Notre Dame and played baseball for his college. He was named an All-Big East First Team outfielder in 2008 and 2009 and All-Big East Third baseman in 2007. The Arizona Diamondbacks drafted him in the first round of the 2009 Major League Baseball. He is the winner of the silver medal at the 2011 Pan American Games. In 2012, he made his debut in MLB with the team. He has spent his first seven seasons in MLB with the Arizona Diamondbacks. Later, in 2019, he signed a contract with the Los Angeles Dodgers.

A.J Pollock has an outstanding career. He has a wife named Kate Newall. The duo recently became parents. Everyone knows A.J., but very few details are known of his wife, Kate Newall. Today, this article sheds some vital information about the life of Kate Newall.

Kate Newall Was Born In Australia And Raised In Britain

Katel Newall was born on February 27, 1989, to Graham and Vicki Newall in Australia. She has two brothers. She was raised in the United Kingdom. She attended St. Catherine’s High School in Middlesex, England.

Kate is a sports enthusiast. During high school, she was a member of the netball, Lacrosse, and tennis teams for four seasons. Besides, she also participated in track and gymnastics.

Kate moved to the U.S. to attend college. She attended Notre Dame – Mendoza College of Business from 2008 to 2012 and obtained a degree in Finance.

Kate Newall Was Very Much Into Lacrosse

Kate was an England Women’s lacrosse team’s upcoming player. She played for England’s national team and was likely to star at one of the premier university teams in her home country.

Kate Newall obtained her degree in Finance from Notre Dame University. She worked in Financial Management from 2012 to 2013 at G.E. Capital. Her current occupation is unknown. However, her LinkedIn profile lists her as a Financial Services Professional.

Kate Newall met A.J. Pollock in college. Yes, they attended Notre Dame and met each other as athletes/students. The two had a lot in common and hence hit off very well.

Kate Newall Got A Dream Proposal From A.J. Pollock

A.J Pollock and his team were in Sydney for a game. Kate Newall accompanied Pollock on his Sydney tour in 2013. Pollock made the perfect use of his free time and proposed to Kate on the Bondi Beach cliff walks. He reasoned his proposal in Australia “She’s from Australia, so I thought this is the best time to do it.”

Kate Newall And A.J. Pollock Are Proud Parents Of A Baby Girl

Kate Newall and A.J Pollock welcomed their first child, a girl they named Maddi Mae Pollock, on March 19, 2020. However, their daughter was only 24 weeks old and weighed around 1 lb 6 oz. Hence, they had a tough time coping with the premature birth of their daughter and had to admit her to the hospital. Finally, after 128 days, the Pollock family managed to take their daughter home to Phoenix.

Kate Newall Is Quite Active On Social Media

Kate Newall is quite active on social media such as Instagram and LinkedIn. However, her Instagram account has 520 followers and is private. Hence we do not have much information on her social media activity. 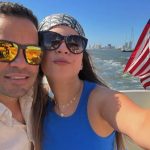 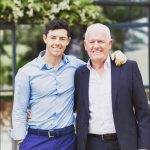