Let us get to know more about Gifty Boakye. She is the girlfriend of Arsenal midfielder Thomas Partey.

Biography of a Ghanaian/American figure

Gifty is a dual national. She holds Ghanaian and American citizenship and is based out of Accra, Ghana. According to reports, she was born in 1993 in Alexandria, Virginia, the USA, to parents who had emigrated to the States.

She loves the Big Apple

Before moving to Accra, Gifty used to work out of New York City. She still spends quality time there. The girl has a fondness for it that cannot be explained in words. This Black Queen got her undergraduate degree, a BS in Communications, from St.Johns University in New York. The city also opened her up to a lot of work opportunities.

What does Gifty do for a living?

The primary source of income for this young woman comes from being a model. She is one of the few black models out there that is doing well in her profession. This young woman has won numerous accolades for her work, including the Local Model of the Year at the 2019 African Entertainment Awards USA.

When did she start seeing Thomas?

It was widely reported in July 2019 that Thomas Partey had begun seeing a new girlfriend who happened to be a model. As it turns out, this model was none other than Gifty. This couple made an appearance at various events. Entertainment sites in Ghana were quick to pick up on the news. The two of them, however, have remained coy about their relationship.

Ms.Boakye dreams of achieving quite a few things in her lifetime. It must be noted that she’s very entrepreneurial and a go-getter. She launched her concept boutique called Native (styled NVTIVE) in 2017. A year later, she started her very own Non-Profit called Sister SLAY that primarily works with children in the 11-18 age group.

How did the idea of NVTIVE come about?

Gifty is a firm believer in embracing one’s individuality and culture. The concept of NVTIVE came to her naturally. She strongly feels that people around the world should not be ashamed of where they come from, no matter the circumstances. With NVTIVE, she aims to pay homage to the customs and traditions of Pan African culture in the design and manufacturing of jewelry, accessories, apparel, and artwork.

She likes to count her blessings!

Boakye is not your average girl. She is a firm believer in God and the plans that he has for her. This young woman is also open-minded and isn’t afraid to take the required action. She knows that all it takes to get energy going is to take one step in the right direction. The girl’s also very focused and hasn’t allowed herself to be distracted, ever.

As a model who has worked with several brands, she got a taste of the good life early on. She loves Yves Saint Laurent and Georgio Armani Sí. You’d find yourself to be on her good side if you gave her a Fenty Highlighter Stick.

What are some of her favorites?

This model loves Milan. Is that even a surprise? She also likes gummy bears, inspirational quotes, and bubble wrap for some weird reason. The lady is utterly gobsmacked by Victoria’s Secret and would love to model for them as well. Gifty likes the 1988 Rom-Com Coming to America and listens to Jay Z as often as she can.

A tall girl with lofty ambitions.

As a 5’11” model, this entrepreneurial lady has been inspirational to a few black girls out there. People like her, who don’t just sit and complain about how the system has been unfair to them but instead take action to make things better for everyone, is what the world needs more of. 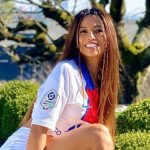 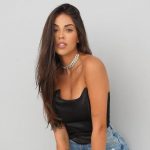