British actor Henry William Dalgliesh Cavill is well-recognized for playing Charles Brandon in Showtime’s The Tudors (2007–2010). He is also well-known for playing the DC Comics character Superman in the DC Extended Universe, Geralt of Rivia in the Netflix fantasy series The Witcher (2019-2023), and Sherlock Holmes in the Netflix movies Enola Holmes (2020) and its 2022 sequel.

Cavill began his career with parts in the movie adaptations of The Count of Monte Cristo (2002), and I Capture the Castle (2003). He received MTV Movie Award nominations for Man of Steel and Golden Raspberry for Batman v Superman: Dawn of Justice.

An amazing actor with classic skills, his professional career is bright and beautiful. Apart from this, he is also known for his personal life with the beautiful Natalia Viscuso. A lady with great educational background and amazing skills, she is charming and talented. So, let us know more about her here.

Natalia Is From Business Family

Natalia is one of the most charming and smart people you ever meet. She is from a family with an entrepreneurial background. Her father is one of the richest Americans in the world. Her mother was a loving and caring lady who left her in 2017 due to a long battle with cancer. As per the information, Natalia is the only child of the beautiful couple.

Natalia earned a bachelor’s degree in 2011 from the School of Cinematic Arts at the University of Southern California. She also participated in extracurricular activities and was recognized academically. She also joined the national honor organizations for those working in the entertainment industry, Phi Theta and Sigma Alpha Lambda.

Natalia Is From Entertainment Industry

Viscuso is the vice president of Roy Lee’s Vertigo Entertainment. This Los Angeles-based production business created the movie Them: Covenant for Prime Video. She was formerly Legendary Entertainment’s vice president of television and digital studios. Man of Steel (2013) and Enola Holmes, both starring Cavill, were produced by Legendary, among other firms (2020). She has prior experience working in the scripted television divisions of the Weinstein Company and ITV Studios.

Natalia Was Featured In MTV’s My Super Sweet 16

According to sources, Natalie M. Viscuso began her career in entertainment in 2005. Her first on-screen appearance, according to IMDB, was in the MTV show My Super Sweet 16. In addition, Natalie has made appearances on several television programs, including The Mist. Sin City is one of the projects that Viscuso has been working on.

Natalia And Henry Are Dating

Natalia and Henry have been dating now for over a year. On April 11, 2021, Natalie and Henry Cavill made their love official on Instagram. The two have been together on the red carpet of Enola Holmes 2 premiere in New York City.

The annual Durrell Challenge, a 13-kilometer race that benefits the Jersey Zoo and the Durrell Wildlife Conservation Trust, is known to feature Cavill as a participant. In 2022, Viscuso joined him; however, they chose to stroll instead of run.

Natalia Is A Dog Mom

Natalia loves animals a lot and is a dog mom. Her adorable French bulldog named Meat is featured in a ton of the photos on her Instagram.

Natalia is highly active on social media and loves to share insights from her personal and professional life with fans. His handle is under the Id @nviscuso, with 123k followers.

Natalia and Henry have been dating for quite a time. The two make a power couple who is away from all kinds of controversies. Though their plans are not revealed yet, we hope to see more of these together soon. Indeed, these are true love birds who share a common passion, respect, and love for each other, which is amazing. 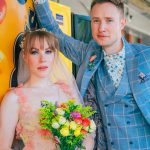