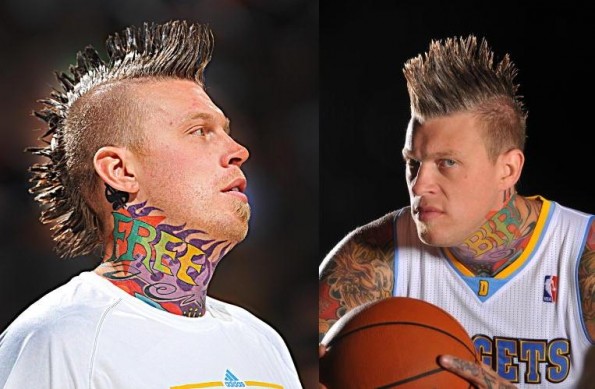 Welcome hoops fans. Welcome to this very entertaining list. We have carefully selected 25 of the very weirdest, interesting and flat out awesome tattoos of NBA players. There are some absolutely hilarious entries in this list, so make sure to stick around till the very end.

Oh the ‘Birdman’. No NBA Tattoo list would be complete without Chris Andersen. This massive ‘Free Bird’ tattoo is so prominent that we just can’t not talk about it. The bird is out of the cage people.

Absolutely freaking creepy. That is what we have to say about AK47’s tattoo. His entire back is covered by some sort of demonic wings. Yikes.

This one is rather controversial. JR’s Supreme tattoo was actually causing him some trouble. The league told him to cover it up, or he would face pretty hefty fines. Players are not allowed to display any commercial tattoos on their body. Ouch.

Well thanks, Chris. Screw you too! He does not seem to care about what other people think of him (as if that was not obvious by looking at his ink).

In case you ever need to know what all the emojis look like you will just need to take a look at Mike Scott’s body. He has them all tattooed on it. Wow.

He likes war. He wants war. He is all about war. Wow. This man was just an absolute beast when he was in the NBA. So unfortunate that he retired.

Dejounte has an image of Teenage Mutant Ninja Turtle on his right shoulder. It does look pretty messed up though, could this Turtle indeed be a mutant?

One of JR’s latest additions to his ink repertoire. This mysterious man is somewhat of a religious figure and JR seems to get inspired everytime he looks at it.

Well this is odd. Look at the tattoo on his neck. That is actually a portrait of his daughter. It looks rather creepy if you ask us. You didn’t ask us? Oh well.

We mean, where do we even begin here. There is hardly a piece of skin that is not covered by a ‘piece’. The Birdman is just absolutely obsessed with ink.

Possibly one of the most famous tattoos in the world. LeBron declared himself the Chosen 1 even before he entered the league. He more than lived up to it though. Could he indeed be the Chosen 1?

Lonzo has a whole bunch of influential black people on his arms. People such as Barack Obama and Dr. King. He is inspired by these individuals and they lead the way. Cool stuff.

Swish! That is what JR stands for. He loves them 3’s and he loves to swish them. He is a trigger happy guard and he will never stop scoring.

He loves himself some 2pac and Rick James. KD continues to provoke and he has become one of the most polarizing NBA players of this era.

Derrick Rose, fast dont lie. Or does it lie now though? There was a time when it didn’t and that is when he got this Poohdini tattoo. Inspiring at the time.

The Fun Loving guy has this rather weird piece on the inside of his right upper arm. What on earth is that Kawhi? We are still trying to figure it out.

Holy mother of tattoos, there is a lot going on on the back of Chris Bosh. A bare tree, a tiger, a bird. What does this all mean. We have asked Chris to comment but he denied. Too bad.

Super Cool Beas. Really Michael? That is some next level type of arrogance right there. Not cool. He was the second pick in the 2008 Draft though, perhaps that gave him a little too much confidence.

A very inspiring piece right here by Blake. A couple of kids overlooking the skyline of a city. What would this mean? Perhaps a flashback to simpler times?

John Wall just LOVED to play Super Mario when he was a youngster. So much so that he actually got himself a tattoo of the little Italian dude. Never grow up John!

They call Mario Chalmers Super Mario for a reason. A reason he seems to believe in himself as well though. Thats why he got a tattoo of it. Life can be so simple.

Dr. King certainly inspires a whole bunch of NBA players. Can you believe the impact this man still has on today’s society? Incredible!

Well, this is interesting. David West is reminding himself to make the most out of every day. Carpe Diem. It is not a particularly original phrase, but whatever floats his boat!

Dame Time. Actually Psalm Time! Thats right he has an entire Psalm verse on his arm. Just to remind himself who he plays for. Dame is indeed very religious. Inspiring.

All eyes on Jameer. That is exactly what he wants and what he needs. He loves to be the center of attention. Or is it just a 2pac quote? Only he knows. 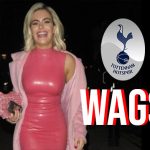 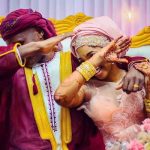