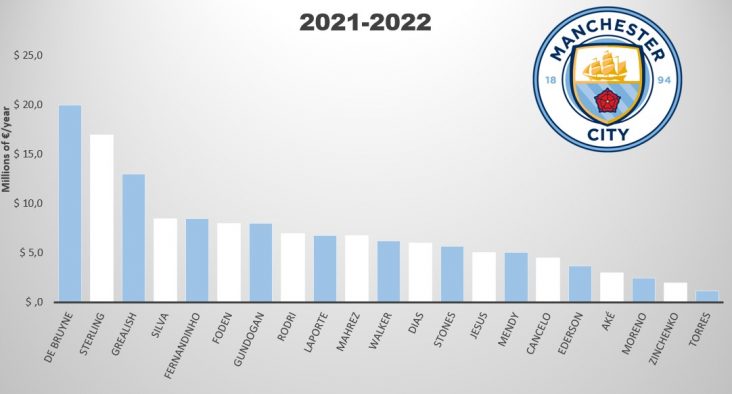 Manchester City pays its players a whopping total of 149.0 million euro’s per year! Interestingly enough that is actually lower than it was in previous years. Manchester City used to be the ultimate big spender in the Premier League but they have since showed that they don’t need to spend the most to be the best.

Since you’ve been viewing this page, Manchester City has spent the following on salaries…

By the way, the average salary per player is 7 million euro’s per player year. Where do they get all that money from?

Manchester City – Salaries compared to the rest of the Premier League

The salaries are sky-high all over the Premier League. But how does Manchester City fare against its competitors and against the rest of the league?

For years now Manchester City is one of the best paying club in the world. They pay their players a lot. And with a lot we mean A LOT.

The average yearly salary expenses in the Premier League are about 85 million euro. As you can see Manchester City surpasses this easily. Just that other club from Manchester, I believe they wear red jerseys – they pay even more!

Which Manchester City player earns the most in the 2021-2022 season?

The talented Belgian offensive midfielder makes a stunning 2.227€ per hour and we even calculated his wage per second. Hold on: he earns 63 cents per SECOND. Kevin de Bruyne, star of the Belgian Golden Generation, we envy you.. we really do!

Do you want to know a little bit more about the legendary playmaker from Belgium, please have a look at his wiki and get to know him for real!

Which Manchester City player earns the least in the 2021-2022 season?

Ferran Torres earns a ‘measly’ €1.000.000 euro. He is the lowest paid player at the club, but boy oh boy, this guy is kind of talented too. He is only at the very start of his career. His salary is at the moment almost 20 times lower than that of top earner Kevin de Bruyne, though. But no worries Ferran, you have a bright future. 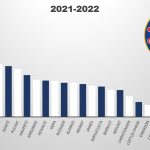 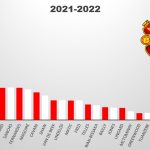