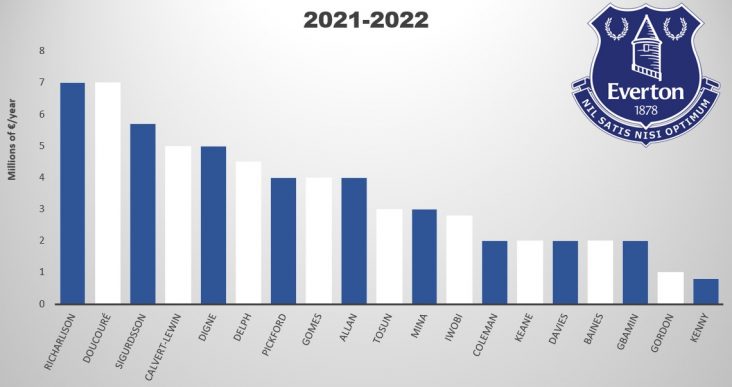 We have compiled all the data necessary, we know exactly how much these players earn. Join us on this journey and find out who has the most shocking salary at Everton and who still has a long ways to go!

Have a look at our overview to find out who earns the most and who earns the least of all Everton players. The salaries have risen steadily at Everton and now we might even conclude that they are ‘sky high’.

Everton pays its players a whopping total of 111,9 million euro’s per year!

Everton – Salaries compared to the rest of the Premier League

Lets have a look at how Everton compare to the rest of the Premier League. We all known that the top 6 is spending the most on salaries but Everton comes in very close after the big names.

The average yearly salary expenses in the Premier League are about 85 million euro. As you can see Everton surpasses that with quite some ease. They have the top 6 ahead of them and we are eager to find out if they can ever compete with them in terms of salaries.

Doucouré earns the most of all the Everton players. He earns 7 million euro per year! That is almost 9 times more than Jonjoe Kenny, the lowest paid player in the Everton squad. The French central midfielder, who came over from Watford in 2020 accounts for 7% of the club’s total salary expenses. That is relatively low, you could say the salaries are spread out in a more even manner at Everton. How neat.

That doesn’t mean that Doucouré isnt kind of amazingly rich. He makes a stunning 760€ per hour and we even calculated his wage per second. Hold on please: he earns 18 cents per SECOND.

We all know that you would love to know a little bit more about the life of this playmaker. We got just the wiki for you, find out all about this lad right now.

Now we get to the very bottom of the list: Jonjoe Kenny. He is the one who earns the least money from all his collegues at the first team at Everton: 800.000 euro. That actually means that his salary is about 9 times lower than that of Doucouré.

Come on Abdoulaye, take the guy out for dinner some day! He’s earned it. 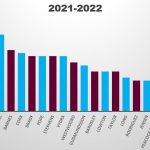 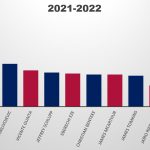