Join WTFoot and discover everything you want to know about his current girlfriend or wife, his shocking salary and the amazing tattoos that are inked on his body. Find out what house the Japanese striker lives in or have a quick look at his cars! 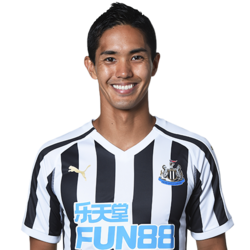 Dear WTFoot fans welcome at yet another interesting profile of yet another amazing football player! This time it’s about the Japanese superstar Yoshinori Muto. He started his youth career at the J1 League club FC Tokyo in 2008. After representing the club for many years he was regarded as one of the rough diamonds from the youth academy. He made his professional debut in the first game of the 2013-14 season. The coach Massimo Ficcadenti truly believed in the youngster and decided to use him almost every game! In his debut year he played 33 games in which he scored the stunning amount of 13 goals. Not bad for a newcomer. It was clear that this lad had a very bright future ahead of him and in the summer of 2015 he signed at the German Bundesliga club Mainz 05. He signed a four-year deal and scored his first hat-trick of his career in October 2015 versus FC Augsburg. In the summer of 2018 the Premier League club Newcastle United announced that they bought Muto for a fee of 9.5 Million Pound and that they agreed on a four-year contract. He made his first BPL game against Manchester United (3-2 away loss).

Wow! This means the average man in the UK needs to work for at least 8 years to earn the same as Mr. Muto earns in only 1 month.

This guy is one of the most promising Japanese football players of the last century and this has a price tag of course - his current market value is estimated at 10 Million Euro (8.6 Million Pound). Before he signed at Newcastle United he was playing for FC Tokyo & Mainz 05 at whom he made a fair amount of money. His current net worth is 9.5 Million Euro (8.5 Million Pound) but we are sure that this will increase, increase & increase!

Muto Tattoo - Does he have one?