Join WTFoot and discover everything you want to know about his current girlfriend or wife, his shocking salary and the amazing tattoos that are inked on his body. Find out what house the Kenian defensive midfielder lives in or have a quick look at his cars! 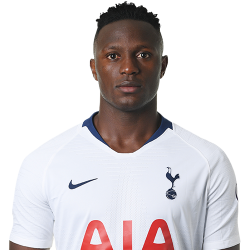 In 2016 the defensive midfielder signed a contract with Tottenham Hotspur that nets him a whopping salary of 2 Million Euro (1.8 Million Pound) per year. We have crunched the numbers, this means he earns €5,464 (£4,785) per day and €228 (£199) per hour!
Since you've been viewing this page, Victor Wanyama has earned...

Wow! This means the average man in the UK needs to work for at least 4.9 years to earn the same as The Beast earns in only 1 month.

He has been playing in the Premier League for a bunch of seasons now and we all know how much money is being spend on salaries in England. As a result The Beast has made a whole lot of money. His current net worth? Roughly 12 Million Euro (10.8 Million Pound). His market value is a lot higher than his 11 Million Pound fee that Tottenham paid suggests. He is one of the strongest players in the Premier League and a welcome asset to a lot of topteams. His market value is roughly 35 Million Euro (32 Million Pound).

Wanyama Tattoo - Does he have one?