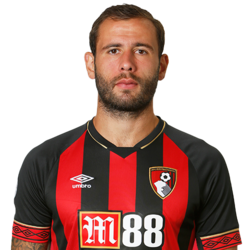 Hello and welcome to the wiki of this lad. Welcome WTFoot fans, we are so happy to have you here to read all there is to know about this player that is currently playing for Bournemouth in the English Premier League. We shouldn't say 'currently' actually because he has been playing at Bournemouth for a very long time now. As a matter of fact he is one of the players in the current squad with the most matches for Bournemouth. This centre back is usually a sturdy option in the defense and he is known for his solid defending, his heading ability and his leadership. He started his career at the youth academy of Brighton. He also made his professional debut for Brighton, he did not play a whole lot of games for Brighton though as he was loaned out to a whole bunch of teams when he was still developing his skill-set. His last loan season he was playing at Bournemouth and they are the team that finally offered him a contract. Ever since he has been playing as a rock at the back. For now, sit back and relax and enjoy all there is to know about The Little Cookie.

Wow! This means the average man in the UK needs to work for at least 6.5 years to earn the same as The Little Cookie earns in only 1 month.

He has been playing in the Premier League for a pretty long time now and we all know how much money is being paid in the highest division of English football. He is worth roughly 12 Million Euro (10 Million Pound). His market value is developing in a rather steady manner. He is a sturdy player for Bournemouth but by no means a star. He is currently worth about 6 Million Euro (5.1 Million Pound).

Cook Tattoo - Does he have one?