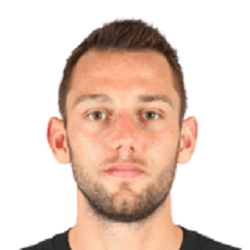 Wow! This means the average man in the UK needs to work for at least avg works 10.1 years for 1 monthly wage of player years to earn the same as The Free earns in only 1 month.

The Inter Milan centre back currently earns a commendable 4.2 million Euros per year, as confirmed by Calcio e Finanza, a substantial increase from the 2.5 million Euros he was making whilst at Lazio. Factoring in the 5 years as pro for Feyenoord, who didn't pay more than 800 thousand Euros a year to any player and that defenders are usually paid much less than attacking players, this hard tackler has an estimated net worth of around 11 million Euros. After having spent a chunk of his career in the Serie A, his market value, in the current climate, is at a decent 50 million Euros .

de Vrij Tattoo - Does he have one?