Join WTFoot and discover everything you want to know about his current girlfriend or wife, his shocking salary and the amazing tattoos that are inked on his body. Find out what house the Argentine goalkeeper lives in or have a quick look at his cars! 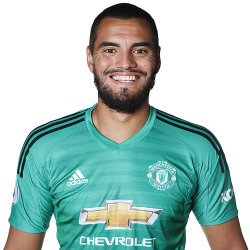 Sergio Romero is a goalkeeper who plays for Manchester United and the national team of Argentina. In his youth he played for Almirante Brown and Comisión de Actividades Infantiles. In 2003 he signed his first professional contract at Racing Club, one of the biggest clubs from Argentina and located in Buenos Aires. He made his debut in the first team three years later, in 2006. The young goalie was clearly talented and showed his potential in the several games he played. But at Racing Club he would always stay the back-up keeper after first choice José Luis Martinez Gullotta. In 2007 it was announced that he signed for AZ Alkmaar, a Dutch club which was at the time managed by the legendary coach Louis van Gaal. The goalkeeper was bought as a young and promising keeper for the future but he took his chance very fast. The first keeper Boy Waterman got injured, Romero entered the goal of AZ and eventually never disappeared. In the 2008-09 season he won the Dutch title with AZ, in which he played an important role. Big clubs like Juventus and Bayern Munich showed interest but he decided to choose for security and signed at Sampdoria in the summer of 2011. He stayed for four years, including one year on loan at AS Monaco, and then signed for Manchester United in 2015. In a free transfer he signed a three year contract. It was once again his old friend Louis van Gaal who took him to England. Nowadays he is the substitute keeper after David de Gea, but in the past years he managed to play some important matches and help the team such as the Europa League final 2017 against Ajax Amsterdam.
ADVERTISEMENT

Wow! This means the average man in the UK needs to work for at least 8 years to earn the same as Chiquito earns in only 1 month.

Romero Tattoo - Does he have one?