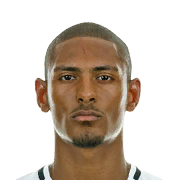 Wow! This means the average man in the UK needs to work for at least 14 years to earn the same as The Cool Bird earns in only 1 month.

Haller is one of the best strikers of the Premier League. In the summer of 2019 he moved from Eintracht Frankfurt to West Ham United for the stunning amount of 50 Million Euro (43 Million Pound). He signed a long-term contract at the London Stadium and belongs to the big earners of the squad with a staggering 5.5 Million Euro (5 Million Pound) per year.

Haller Tattoo - Does he have one?