Join WTFoot and discover everything you want to know about his current girlfriend or wife, his shocking salary and the amazing tattoos that are inked on his body. Find out what house the French/Cameroonian centre back lives in or have a quick look at his cars! 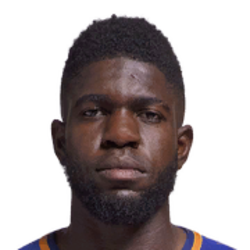 Wow! This means the average man in the UK needs to work for at least 14.5 years to earn the same as Titi earns in only 1 month.

The Frenchman came up through the youth system at Ligue 1 club Olympique Lyonnais, he starred for their first-team between 2012-2016 racking up over 130 appearances. He moved to Spain to sign for FC Barcelona for a fee of €25 million in 2016. The French centre-back has a net worth close to €34 million (£31.1 million); his market value sits at around €45 million (£41 million), however, Barça have a buyout clause of €500 million for the Frenchman.

Umtiti Tattoo - Does he have one?