Join WTFoot and discover everything you want to know about his current girlfriend or wife, his shocking salary and the amazing tattoos that are inked on his body. Find out what house the Scottish winger lives in or have a quick look at his cars! 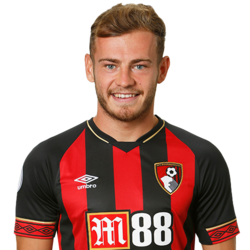 This Scottish lad was born in Aberdeen and made his debut for, of course, Aberdeen. It was back in 2010 and he was only sixteen years old. He made a great impression in first game against Heart of Midlothian in October 2010. And he continued to do so in the very same season, he was the absolute revelation of the 2012-13 Scottish Premier League season. He won among others the Youth Player of the Month award in September and October 2012. In January 2013 he moved to the British Championship and signed a three-year contract at Bournemouth. The Cherries paid Aberdeen a transfer fee of 400.000 Pound to complete the deal. Already in his first season he played an important role in the promotion of the club to the Premier League. He scored his first Premier League goal against Liverpool (4-3 win) on 4 December 2016. In the very same game, he won a penalty for his club, scored the second and prepared the third. And all of this in one half! Since this day the fans of Bournemouth knew they had a new star at their club. Fraser also plays for the Scottish national team for whom he is a regular player.

Wow! This means the average man in the UK needs to work for at least 4 years to earn the same as Speedy Ryan earns in only 1 month.

He is a player for the Scottish national team and is doing very well at The Cherries. With his pace, rushes and clinical finishing he is a very all round player. His market value is 25 Million Euro (22 Million Pound). Playing already for a couple of years at the highest level of England. This lad has a net worth of 11 Million Euro (9.5 Million Pound).

Fraser Tattoo - Does he have one?