Join WTFoot and discover everything you want to know about his current girlfriend or wife, his shocking salary and the amazing tattoos that are inked on his body. Find out what house the Portuguese centre midfielder lives in or have a quick look at his cars! 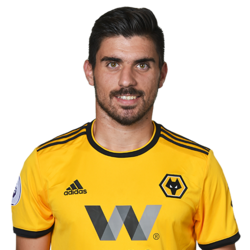 In July 2018 the centre midfielder signed a contract with Wolverhampton Wanderers that nets him a whopping salary of 3 Million Euro (2.6 Million Euro Pound) per year. We have crunched the numbers, this means he earns €8,197 (£7,100) per day and €342 (£296) per hour!
Since you've been viewing this page, Rúben Neves has earned...

Wow! This means the average man in the UK needs to work for at least 7 years to earn the same as Ruub earns in only 1 month.

He is regarded as one of the biggest talents of Portugal. At the age of 18 he was already the captain of FC Porto. Doesn't that say enough? He showed his excellence potential in the Championship and did exactly the same in the following BPL season. He has a bright future ahead of him. His current market value is estimated at 40 Million Euro (35 Million Pound). He joined the side of the Wolves in 2017 but signed a new and improved contract in July 2018. His current net worth is 12 Million Euro (10.5 Million Pound).

Neves Tattoo - Does he have one?