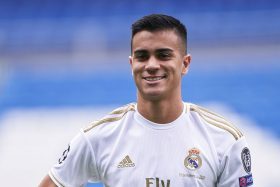 Wow! This means the average man in the UK needs to work for at least ‭3.05 years to earn the same as Golden Boy earns in only 1 month.

His net worth improved to 1.5 million Euros after he was signed by Real Madrid. It'll only go up from here. His market value is already at 25 million Euros.

Reinier Tattoo - Does he have one?