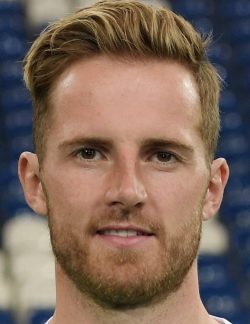 Hey there fellow WTFoot fan, follower or simply fanatic. We are welcoming you to the juicy wiki of Das Mänchen, the German goalkeeper who is currently playing for Norwich City in the English Premier League. He is most well known for his time at Schalke 04, the club that he started both his youth career as well as his professional career at. He played in Gelsenkirchen in 2008 but he was then bought by Frankfurt. He played at Eintracht Frankfurt for two years before being bought back again by Schalke. Old habits die hard, apparently. After several years at Schalke he was send on loan to Norwich City in the summer of 2019. It was always a dream of his to live and play in England. He is just such a passionate footballfan and he wanted to see what the Premier League is all about. He has played for several youth teams of the German National Team too. He never managed to play a game for the first team yet though. It makes sense as well given the fact that there is very fierce competition in the first team. You have the likes of Manuel Neuer of FC Bayern and ofcourse Marc-André ter Stegen from FC Barcelona. Good luck with that. Either way, lets have a look at the life of this remarkable goalie!

Wow! This means the average man in the UK needs to work for at least 5 years to earn the same as Das Mänchen earns in only 1 month.

His net worth has been developing rather steadily. He has always earned more than a million euro throughout the last years of his career. As a result his net worth is roughly 10 Million Euro (9 Million Pound). His market value is going to decline slightly. He is getting a tad bit older, even though that is not usually a massive problem for goalkeepers. At the moment his value is about 10 Million Euro (9 Million Pound).

Fahrmann Tattoo - Does he have one?