Join WTFoot and discover everything you want to know about his current girlfriend or wife, his shocking salary and the amazing tattoos that are inked on his body. Find out what house the Czech goalkeeper lives in or have a quick look at his cars! 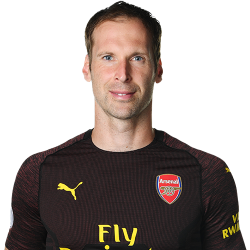 Wow! This means the average man in the UK needs to work for at least 14 years to earn the same as Mr Perfect earns in only 1 month.

He has been playing professional football for a very long time now, most noticably his salary at Chelsea was immense and he stayed there for 11 years. As such his net worth is remarkable, we expect it to be around 34 Million Euro (29 Million Pound). His market value is diminished to almost nothing at this point. Chances are very high that he will retire at Arsenal and we don't think he is the type of player who will make a move to China or the Middle-East. As a result his current market value is about 500.000 Euro (385.000 Pound).

Čech Tattoo - Does he have one?