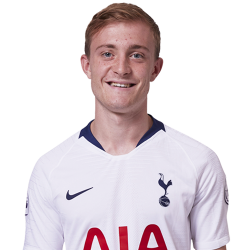 Meet The Skipper, perhaps the future skipper of the Spurs? Time will tell. This player is usually playing as a defensive midfielder and he has a very bright future. Even though he is very young he has already made his Premier League debut for the Spurs and he has already made a good impression on Spurs' manager Mauricio Pochettino. He has also already played for a whole bunch of Englands National Youth Teams, the under 16, 17 and 18 teams. He was born in the year 2000, which was a great year by the way! We have discovered a lot of interesting information about this youngster and we are going to share it with you guys in this beautiful wiki of the defensive midfielder. His special trait of choice is 'interceptor', that means he is absolutely great at recovering balls and stealing posessions away from the opponent. Dont let this lad get close to you or he will probably steal the ball away from you! That is just what The Skipper does. Did we already tell you that he managed to provide two assists in an FA Cup tie against Tranmere Rovers in 2019, what a lad! Lets hope he can keep up the development because, yeah, that would be awesome for Oliver himself though!

Wow! This means the average man in the UK needs to work for at least 0.6 years to earn the same as The Skipper earns in only 1 month.

He is obviously still a youngster and it shows in his contract. He is currently worth about 1 Million Euro (800.000 Pounds). His market value is a bit harder to determine, but it does say a lot about the talent of this guy that Tottenham signed him in 2018. So we expect his market value to be roughly 4 Million Euro (3.6 Million Pound) at the moment.

Skipp Tattoo - Does he have one?