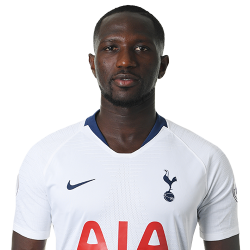 Meet this very versatile player from France. He is a midfielder but he is actually capable of playing a variety of position in the middle of the pitch: holding midfielder, central midfielder and he is even capable of playing in an attacking style. All of this is paired with his typical 'box-to-box' mentality, he is simple covering a whole lot of the pitch with his massive legs. A great player to have on the squad and that is exactly why Tottenham contracted the player in the summer of 2016. MousMous had just played a succesful UEFA EURO 2016 in his homecountry and thus several big teams were interested. Tottenham paid a whopping 33 Million Euro for the Frenchman and he has proven to be a reliable force at the midfielder for manager Mauricio Pochettino. His international career saw a somewhat dissapointing bunch of events take place. He was a part of the 2016 squad that made it to the finals of the UEFA EURO 2016 tournament. Unfortunately for MousMous he was not a part of the 2018 squad that eventually won the world cup. Poor guy! Now lets dive right into his life, we will tell you all there is to know about this interesting player.

Wow! This means the average man in the UK needs to work for at least 13.6 years to earn the same as MousMous earns in only 1 month.

Sissoko Tattoo - Does he have one?