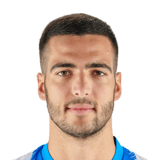 Wow! This means the average man in the UK needs to work for at least 5.9 years to earn the same as Wooly earns in only 1 month.

He was worth €2 million when he moved to Dortmund. Sociedad paid a fee of €12 million to secure his services in 2018. It was a bet that paid off. The youngster has developed into a complete footballer and is now worth €35 million. Sponsored by Adidas, this midfielder has a net worth of about €2.5 million from his earnings.

Merino Tattoo - Does he have one?