Join WTFoot and discover everything you want to know about his current girlfriend or wife, his shocking salary and the amazing tattoos that are inked on his body. Find out what house the Irish centre forward lives in or have a quick look at his cars! 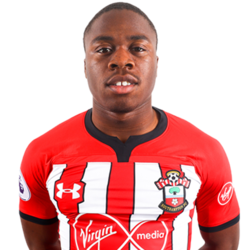 Born in Dublin, Ireland, to Nigerian parents and raised in London, England. He spent his youth career in a variety of football academies including Chelsea, Arsenal, Watford and Leyton Orient before joining Southampton in 2016. After a couple of years of coming through The Saints' youth ranks he signed his first professional contract with the club in 2018, he made his professional debut as a substitute in a 1-1 draw against Tottenham Hotspur in January 2018 becoming the second youngest player to do so for Southampton aged 17 years and 199 days. The Irish striker scored his first professional goal in a 3-1 victory against Huddersfield on 22 December 2018 thereby becoming Southampton's youngest ever goalscorer in the Premier League at 18 years and 169 days. After a bright start the young striker's season was cut short due to recurring hamstring injuries. On the international stage he had the option to represent both Nigeria and England but opted for his country of birth Ireland instead, he represented the Republic of Ireland in the Under-19 UEFA European Championship Qualification campaign and made his debut for the senior team in a UEFA Nations League match against Denmark on 19 February 2018, thus making him the first player born in the 2000s to win a senior cap for Ireland.

Wow! This means the average man in the UK needs to work for at least 1.5 years to earn the same as Mica earns in only 1 month.

The 2018/19 season was the teenagers first foray in professional football, his three-year contract with Southampton has seen his net worth rise to €1.7 million (£1.5 million). The youngster is still unproven and has a market value of €1 million (£0.9 million).

Obafemi Tattoo - Does he have one?