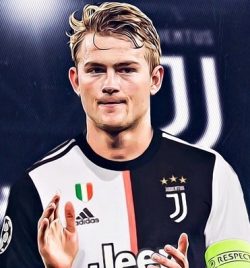 Wow! This means the average man in the UK needs to work for at least 35.2 years to earn the same as Matta earns in only 1 month.

He has only just started playing professional football but he is obviously The Golden Boy of European football. This ensures that his net worth is roughly 9 Million Euro (8.1 Million Pound). Now that he is at Juventus his net worth will certainly be going through the roof pretty soon. His market value is absolutely sky-high. He is the best young defender in Europe and one of the very best defenders overall. As such his market value is about 85 Million Euro (77 Million Pound).

de Ligt Tattoo - Does he have one?