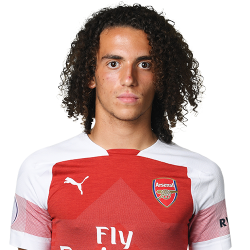 Wow! This means the average man in the UK needs to work for at least 5 years to earn the same as Guendolicious earns in only 1 month.

He has played pro-football for a few years now but he obviously still a rookie. His contract at Arsenal will earn him lots more cash than he earned in Lorient though and we expect his Net Worth to be rising in the coming years. At the moment it is around 3.4 Million Euro (3 Million Pound). His market value is on the rise. He made the move from Lorient and has already proven to be a valuable addition to Arsenal, especially when looking at the future. His market value is estimated to be about 12 Million euro (10.5 Million Pound).

Guendouzi Tattoo - Does he have one?