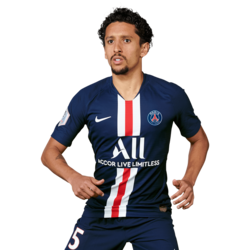 Wow! This means the average man in the UK needs to work for at least 31.9 years to earn the same as Marquinhos earns in only 1 month.

The Brazilian defender has plied most of his senior career with French powerhouse Paris Saint-Germain. His net worth is estimated to be in the region of €75 million (£65 million). The 25-year old centre-back is operating in at the peak of his powers, reflected in his market value of €65 million (£56 million).

Corrêa Tattoo - Does he have one?