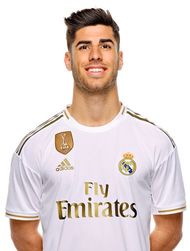 Wow! This means the average man in the UK needs to work for at least 20.5 years to earn the same as Chico de Oro earns in only 1 month.

The Spanish 'Golden Boy' got his first taste of La Liga football at Mallorca, before Real Madrid signed him up in 2014. Only 23 years of age, he has already conjured a net worth of €55 million (£48.9 million); his market value sits at approximately €60 million (£53.3 million).

Asensio Tattoo - Does he have one?