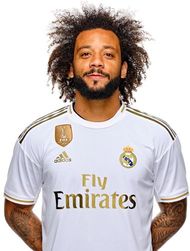 Wow! This means the average man in the UK needs to work for at least 48.1 years to earn the same as El Loco earns in only 1 month.

The Brazilian signed for Real Madrid from Fluminense in 2006, and since then has had a storied career spanning 13 years, redefining the full-back position in the process. He has built up quite a fortune during his time in Spain, with a net worth well over €168 million (£149 million). Now at the twilight of his playing career his market value sits at a modest €25 million (£22.2 million), but there are simply some things money can't buy!

Marcelo Tattoo - Does he have one?