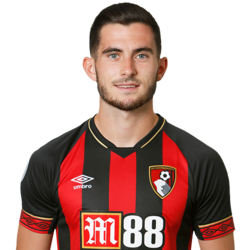 This English footballer plays usually as a midfielder. In July 2016 he signed a contract at AFC Bournemouth, who signed him for 8.2 Million Euro. The lad from York played for Leeds United from 2014 to 2016. He is a true product of Leeds’ youth academy. He made his debut for Leeds on 9 August 2014. Leeds was playing the Championship and it was a game against Millwall. Only three days later he started in the first eleven for the League Cup against Accrington Stanley. Already In his first season he managed to impress his coach and become a regular in the first team and finished in the mid table during his first season. The guy seemed to be talented and signed a contract at Dean Court un till 2020. Bournemouth was playing in the Premier League and finished at the 16th place the year before. During his first season he played six games, the very next season he definitely conquered a spot in the first eleven. He was called up by the senior team of England for the first time in November 2017 for a friendly game against Brazil. Will this lad be an important player of The Three Lions in the upcoming years? Only time can tell! Keep on following WTFoot.

Wow! This means the average man in the UK needs to work for at least 4 years to earn the same as Cookin' Lewis earns in only 1 month.

Moved from Leeds to Bournemouth and we are sure that The Cherries won't be his last stop. He is impressing this season and many big clubs are trying to lure him to their stadium. His current market value is 25 Million Euro (22 Million Pound). Still young, still a lot of money to earn at the highest level of football. His current net worth is 8 Million Euro (7 Million Pound).

Cook Tattoo - Does he have one?