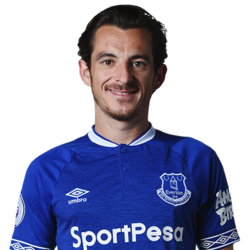 Wow! This means the average man in the UK needs to work for at least 10.1 years to earn the same as Bainesy earns in only 1 month.

The veteran left back has been playing football for well over a decade now with time at spent Wigan Athletic but mostly with his boyhood club Everton, he has garnered a net worth of €31.3 million (£27 million). The Englishman is in the twilight of his career and has a market value €5.2 million (£4.5 million).

Baines Tattoo - Does he have one?