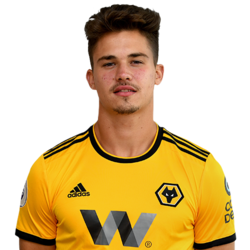 In July 2019 the centre back signed a contract with Wolverhampton Wanderers that nets him a whopping salary of 2.3 Million Euro (2 Million Pound) per year. We have crunched the numbers, this means he earns €6,284 (£5,435) per day and €262 (£226) per hour!
Since you've been viewing this page, Leander Dendoncker has earned...

Wow! This means the average man in the UK needs to work for at least 6 years to earn the same as Leandriñho earns in only 1 month.

After being one season on loan at Wolverhampton he permanently joined the Wolves in the summer of 2019. He signed an impressive contract that nets him a whopping 2.3 Million Euro per year. His current net worth is 8 Million Euro (7 Million Pound) but we at WTFoot ensure you that this is only the beginning of something beautiful! Dendoncker is skilled, talented ánd young. His price tag? 18 Million Euro!

Dendoncker Tattoo - Does he have one?