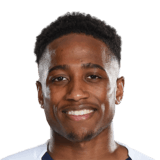 Wow! This means the average man in the UK needs to work for at least 2.9 years to earn the same as KWP earns in only 1 month.

He has obviously only just started his professional career and as a result he has not really made loads of cash yet. Yet. Expect this number to rise but at the moment his Net Worth is about 1 million euro (900.000 Pound). His Market Value is rising and rising. At the moment, after thorough calculations, we have estimated to be about 9 million euro (8.1 Million Pound).

Walker-Peters Tattoo - Does he have one?