Join WTFoot and discover everything you want to know about his current girlfriend or wife, his shocking salary and the amazing tattoos that are inked on his body. Find out what house the Turkish, German central attacking midfielder lives in or have a quick look at his cars! 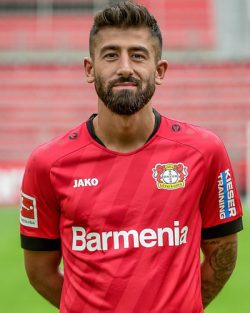 Wow! This means the average man in the UK needs to work for at least 8.2 years to earn the same as Demirinho earns in only 1 month.

The former Turkish international became the highest earner in Bayer Leverkusen's history after he was offered a massive €3.2 million contract. Hence, it comes as no shock that his net worth has crossed the €3 million mark this summer. With a sensational run of form in the past 20 months, Kerem's market value has sky-rocketed to an impressive €32 million.

Demirbay Tattoo - Does he have one?