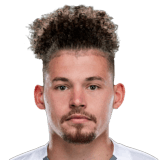 Wow! This means the average man in the UK needs to work for at least 2.6 years to earn the same as Yorkshire Pirlo earns in only 1 month.

Born and bred in Leeds, United Kingdom, the midfielder has gone on to fulfill his dreams of playing for his boyhood side. The 24 year old's current contract The Peacocks puts his net worth at an estimated 9 Million Euro (8 Million Pound). Subject of numerous bids from clubs both in England and across Europe, Leeds United have slapped a massive price tag on the Stockport Pirlo which puts his market value at 33.4 Million Euro (30 Million Pound).

Phillips Tattoo - Does he have one?