Join WTFoot and discover everything you want to know about his current girlfriend or wife, his shocking salary and the amazing tattoos that are inked on his body. Find out what house the German right back lives in or have a quick look at his cars! 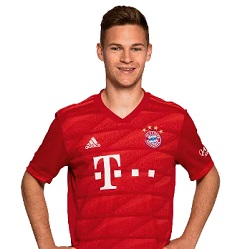 Wow! This means the average man in the UK needs to work for at least 18.9 years to earn the same as Joker earns in only 1 month.

The German footballer is a product of FC Bayern Munich's youth academy. He is one of the most talented youngsters in the scene, an absolute gem of a player who is well versed in playing across different positions in midfield and defence. The 24-year old has a net worth of €42 million (£36 million); his market value is in excess of €70 million (£60.4 million).

Kimmich Tattoo - Does he have one?